A meeting of our District was held (on-line) on the 21st July. Delegates participated from sections in England, Italy, Pakistan, Portugal, Spain and Rachael McGuffin from ISA Staff. The meeting was chaired by Francisco Díaz-Andreu, District 12 VP.

A review of progress with objectives was given and will be further examined in the next meeting. Sections were reminded to submith their annual report prior to 31st July.

The 5G Webinar (June 2021) was reported as a success and it was agreed to continue with this type webinar as a compliment to section events. It was suggested that earlier notice be given for these. There may be webinars given in sections which could be used also throughout the District. A session is also to organised to advise how best to set up such a seminar. The regular webinars being organised from the HQ in Research Triangle Park are also reccomended as a useful resource for sections.

The Mentoring Excellence award has been awarded to M.J. Raposo (Spain Section). She also gave a presentation on mentoring students in a project of the Spain Section.

There was a presentation on Sections (including Student Sections) health analysis. This included a section health check list and special emphasis on Vibrant Leadership points for new and key board members. In ongoing training the Section President's role was reviewed.

It was announced that Marty Bince has been elected as ISA President Elect/Secretary and will serve as President during 2023.
On the information about ISA international it was informed that a proposal to divide the district into two separate districts (Europe + Russia and Middle East + Africa) has been proposed at the District Restructuring Task Force. No decision has been made yet on this issue.

There was a presentation on Student Sections in the District.

This excellent video promoting this year's Automation Summit was shown.

Training Sessions are scheduled for 20th & 21st September followed by the Summit proper 22nd-23rd September and that in turn by the District Leaders' Meeting (DLM) 23rd-24th September.

• Copies of presentations are available to members on request.
Posted by Eoin Ó Riain at 4:17 AM No comments:

Email ThisBlogThis!Share to TwitterShare to FacebookShare to Pinterest
Labels: DLC

ISA Transactions is the journal of advances and state-of-the-art in the science and engineering of measurement and automation, of value to leading-edge industrial practitioners and applied researchers. It is distributed through Elsivier. 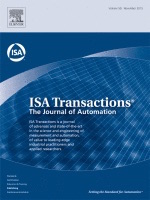 The following statistics have recently been reported. The latest Impact Factor of ISA Transactions has gone up from 4.305 to 5.468! The latest Elsevier CiteScore has also gone up from 8.0 to 8.7!

"These are excellent indicators and clearly demonstrate our significantly improved ranking among scientific publications, particularly those within the same scope as ISA Transactions." said the Group Publisher with the ISA, Nick Zabel.

He sincerely thanked Ahmad Rad and his entire editorial team for their dedicated and continuous handwork towards making ISA Transactions a top scientific publication.